I don' t know when I wrote this, but it has been cobbled together for years now. In its last incarnation, my grandson Skyler was 18--now he's 26 and an officer and his mother would still make him cookies every day if it would keep him safe. It would be easy to make this a political post, but this is neither the time nor--right now, today--the place. I've changed my mind on many things over the years, and my own patriotism has taken a hard hit, but the things here--they're the same. Thank you again, veterans.

The torch; be yours to hold it high.
If ye break faith with us who die
We shall not sleep, though poppies grow
In Flanders fields.
A few years back, the fifth graders at my grandson’s school performed their annual Veterans Day salute. They sang and shook hands with veterans in the audience. There was a long slide show of pictures of mothers and fathers and grandfathers and other relatives who had served in the armed forces. I thought my eyes would never get dry. After watching the program, I tried to put into words how I feel, how proud and grateful I am that so many have served so long and so well.
Except I didn’t have any new words, though my eyes are leaking again as I write this introduction to a tribute I still feel.
John Thomas and Amos Ash were residents of Miami County, Indiana. They fought with the 20th Regiment of Indiana. They died at Gettysburg in 1863.
Uncle Mart was ten years older than Aunt Ethel. They were married forever, but they never had any children. That always seemed odd to me, but it really wasn’t. They adored each other and never needed anyone else; they were a complete family unit unto themselves. He was bald and funny and liked to fish. He served in the first World War. The Big One, some people said.
I don’t remember what his name was, but he and his parents were visiting my family when something happened and they had to return to their South Bend home at once because he had to catch the next train back to his duty station. The day was December 7, 1941, long before I was born, but I still remember the empty look on Mom’s face when she told the story.
Thadd was a baker in the navy during that war, the second of the World Wars. The one

more people called The Big One. A couple of years after he came home, Thadd and Mary got married and they had five kids.
His name was Wayne. I was at his going-away party before he left for Vietnam. He was young and smart and eager to serve his country. There was a girl at the party who looked at him with soft eyes. We laughed a lot, had a good time, and wished him luck when we left. We were used to it, I suppose, to saying goodbye and hoping for the chance to say hello when they came back home, so we didn’t give it that much thought.
Wayne, though, and Mike Waymire and John Miller, to name but a few, came home in flag-draped coffins. We watched the news, read the papers, wept. We remembered smooth-faced, laughing boys and mourned with the wives and girlfriends and mothers who would never feel the same again, with fathers silent and stoic in their grief. We acknowledged empty places and heard remembered laughter and voices echo through them. 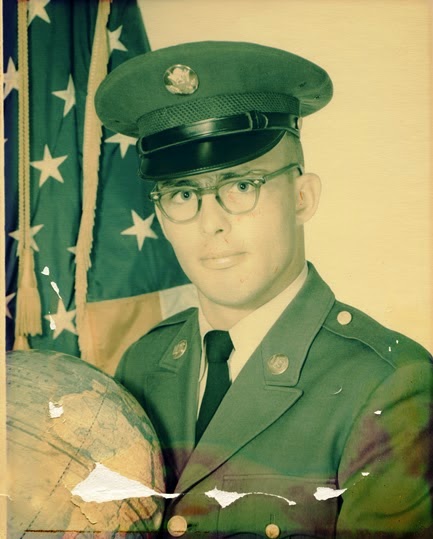 I married the second of Thadd and Mary’s kids after he came home from Vietnam. Like the Korean Conflict, no one ever called it The Big War, but to the ones who served there, and the ones who waited at home, they were big enough. Long enough. Sad enough.

When Desert Storm happened our son Chris was stateside, wearing the army uniform his father had.
We watched and waited and feared and prayed. It was the same with Iraq. With Afghanistan. With all the other wars and conflicts and skirmishes where Americans have served. 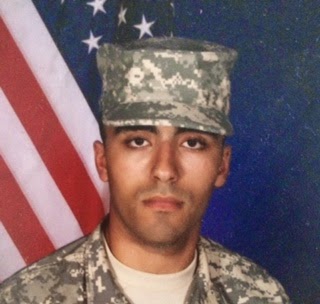 My grandson Skyler is 18, a senior in high school. He spent the summer in basic training. He's our handsome, sweet boy and even though he wears a uniform well, it makes my heart clutch seeing him in it. He has walked and talked and breathed military since he was eight years old so I shouldn't have been surprised when he was ready to enlist, but I wasn't ready for it. He wants to serve and I want to make him cookies--I suppose it is the same with all young military men and their mothers and grandmothers.
In October of 2010, the city of Logansport, Indiana welcomed Sgt. Kenneth K. McAnich home. The hearse drove slow and solemn through streets lined with flags and people, the Patriot Guard riding protective escort against those who might not be respectful. It’s symbolic, this ceremonial farewell we offer our fallen warriors. I’m sure it does little to fill the echoing empty places created by their deaths. But it’s all we can do.
My husband remembers how people looked at him in airports when he came home from Vietnam. How they sneered and then looked away. I saw the same thing in Indianapolis, when among the celebratory crowds coming home at Christmastime walked a lone soldier, carrying his duffel bag and staring straight ahead. Over forty years later, those who served in Vietnam know it wasn’t them people hated; it was the war. But they still remember.
We all hate war. All of us. Thank goodness we’ve learned how to welcome home those who fight in them. We’ve learned to applaud them in airports and on planes, to buy their lunch once in a while if they’re behind us at the cashier’s station, to say thank you and mean it.
That’s why November 11 is Veterans Day. It is not a day of celebration, although rejoicing in freedom is probably never wrong. It is instead a day of remembrance and honor to the men and women who have for nearly 240 years and who continue to serve in the preservation of that freedom. Thank you to all of you. God bless you. God bless America.
Have a good week.  Be nice to somebody.
at November 12, 2022
Email ThisBlogThis!Share to TwitterShare to FacebookShare to Pinterest