Having yet another fangirl moment...give me a minute... Laura Drake is yet another one of my favorite writers. I read the following essay on her blog the other day and begged asked if I could use it on the Window. I love what she says here...the power it gives us if we just take it. So, here you go. 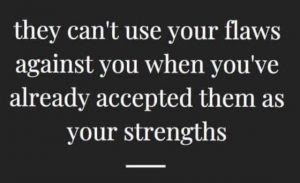 I saw this meme on social media today, and it reminded me of a huge discovery I made that changed how I saw the world.

See, I’ve been an outlier all my life. As a kid, I was a dreamer. My mother told me to get ready for school only to come back five minutes later to find me with one sock halfway pulled up, staring off at nothing. I stayed a kid as long as humanly possible, despite high school graduation. As much as I adore people, I’d rather read. I’m a klutz. Seriously. I broke my foot once, falling upstairs. I’m the one in a party who says things that I should keep inside, only I don’t realize it until I see it on the face of my audience. My way of learning is to ignore advice, discover all the ways that won’t work, until I stumble upon the way that will.

I held these things and more as my secret shame all my life. Until I didn’t.

What changed? I realized that, whereas they are seen as weaknesses by the general public, most of them are exactly what I needed to become a writer.

Dreamer=imagination. Picturing people and worlds that don’t exist, but should.

Staying a kid=perspective. Seeing the world through the eyes of wonder and putting that on a page.

Reading=drive. I’ve read so many books that made me want to be that good. They push me to be better every single day.

Awkward=empathy. You have to get into flawed characters’ backstories and motivation to build empathy for your characters. I understand flaws down to my bones.

Blurting=honesty. Sometimes you feel something so deeply that you want to explain it so others can understand. Okay, so a party may not be the best venue for that, but when it wants out, there is no stopping it.

Failing=persistence. Probably my greatest strength. I once had a boss tell me that I learned slowly, but once I figured it out, I never made a mistake again. I GOT it. I survived 417 rejections before I signed with an agent. I wanted it, and I figured if I kept breathing and learning, I had to get there eventually. It’s science.

It took me many years of struggling before I learned to embrace my weaknesses. Many more to embrace them. Now I see them as my strengths. I just had to find the right career to take advantage of them.

And being me, I had to find all the wrong ways first.

But what an amazing life that’s made! Not to mention the plots…

What are your weaknesses? Try a paradigm shift – how are they your strengths? 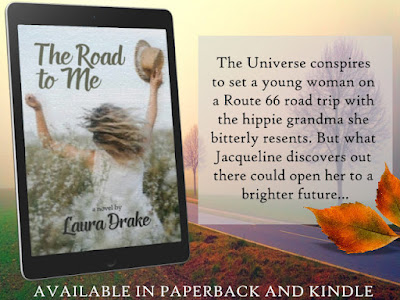 Jacqueline Oliver is an indie perfumer, trying to bury her ravaged childhood by shoveling ground under her own feet. Then she gets a call she dreads—the hippie grandmother she bitterly resents was apprehended when police busted a charlatan shaman's sweat lodge. Others scattered, but Nellie was slowed by her walker, and the fact that she was wearing nothing but a few Mardi-Gras beads. Jacqueline is her only kin, so, like it or not, she's responsible.

Despite being late developing next year's scent, Jacqueline drops everything to travel to Arizona and pick up her free-range grandma. But the Universe conspires to set them on a Route 66 road trip together. What Jacqueline discovers out there could not only heal the scars of her childhood but open her to a brighter future.

Note from Liz - Although The Road to Me is available everywhere, here is the Amazon link. https://www.amazon.com/Road-Me-novel-Laura-Drake-ebook/dp/B09QNVSKFB Don't miss it!

Laura Drake is a New York and self-published published author of Women's Fiction and Romance. Her debut, The Sweet Spot, was a double-finalist, then won the 2014 Romance Writers of America® RITA® award. She’s since published 12 more books. She is a founding member of Women’s Fiction Writers Assn, Writers in the Storm blog.
Laura is a city girl who never grew out of her tomboy ways, or a serious cowboy crush. She gave up the corporate CFO gig to write full time. She realized a lifelong dream of becoming a Texan and is currently working on her accent. She's a wife, grandmother, and motorcycle chick in the remaining waking hours.
at June 01, 2022
Email ThisBlogThis!Share to TwitterShare to FacebookShare to Pinterest
Labels: #MadisonIndiana #WednesdayattheWindow, #RITAWinner, #strengths, #weaknesses, Laura Drake, The Road to Me