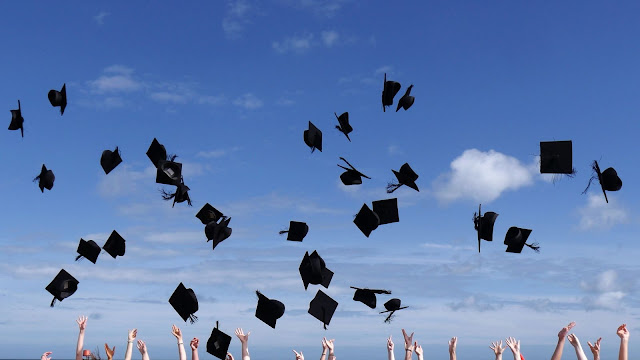 We went to a graduation last night to watch the sixth of our Magnificent Seven grandkids end his high school career. It was a beautiful might for a commencement and the football field bleachers were filled with well-wishers.
For the first time in a while, I felt a sliver of sharp regret for the way things used to be. I thought, but thankfully didn't say, that when I was their age, we knew how to throw a graduation.
I missed the invocation, the benediction, the blanket prayer to keep the graduates safe, give them success, give them smooth roads and sunny days as they venture forth. I missed the attempted solemnity being constantly broken by the excitement of a bunch of 18-year-olds having their day. I missed the choir singing, with retiring seniors in their midst in their caps and gowns. I missed the high school band playing "Pomp and Circumstance." The piped music that bounced out over the football field may have been the high school band, but it didn't sound like them; it sounded like too-loud piped music.
There were a lot of faculty and administration sitting in chairs looking benevolently out over the sea of graduates. The teachers and administrators were robed, wearing stoles and chevrons that told us who they were and what degrees they held. I'll bet they were hot. The school board was recognized. Veterans were recognized. It was mentioned how weird and how difficult this class's high school career had been because of Covid-19.
The speeches from the two salutatorians and the valedictorian were sharp, succinct, and...pithy. The speakers were smart and well-spoken, although they read their speeches verbatim.
No one talked about how wonderful the Class of 2022 was. No one mentioned names or told stories or sang praises. They read their names, the graduates shook hands with the school district's superintendent. And then it was done.
Except for that one solemn and splashy moment when they were announced graduated and turned their tassels, when the air above became a speckled sea of caps tossed in their final act as a class.
I understand that some of the things I miss are gone for good reasons. I understand if everything I'd wanted included in commencement had been, we might still be sitting there. I understand that all graduations don't feel like this one did.
Maybe it's another instance of missing not the way things actually were but the way I remember them. (That happens a lot as we go along--just sayin'.)
But, just for the record, in case anyone needs to hear it, congratulations, Class of 2022. You are wonderful and talented and smart and you will do great things. And I'd love to hear your stories.
I read a poem by Chen Chen this morning. Its title was "When I Grow Up I Want to Be a List of Further Possibilities." That's what you are, the list of the world's future--don't leave any of those possibilities unexamined. Have a good week. Be nice to somebody.
at June 04, 2022
Email ThisBlogThis!Share to TwitterShare to FacebookShare to Pinterest
Labels: #Classof2022, #FionneganFlaherty, #graduation, Chen Chen