“I honestly think it is better to be a failure at something you love than to be a success at something you hate” – George Burns
Roberta Struck makes the best pies I've ever eaten. In non-pandemic times, when classes in creative arts are given at the fairgrounds, her pie-making class always fills up right away. When pies are discussed anywhere, all eyes turn to her in expectation, because we know whatever she says is going to be good. When our extension homemakers club has carry-in dinners, I look around furtively for Roberta's pies to make sure I get a piece before they're gone.

She made an applesauce pie. It was, I swear, one of the best desserts I'd ever had. I can do this. The thought was in my head, feeling like it always looks in cartoons when someone gets a fabulous idea. I could buy the crust, of course, because...well, if I'm making the pie, you want the crust to be store-bought, but I could put together those other ingredients. I have them all.

It was awful. Actually probably worse than awful. I couldn't eat it and even the cats gave me shriveling looks before walking away. (I made that up, by the way--I don't feed them sweet things.)

When I first decided I would write a book, sometime way back in the last century, I did what you have to do in order to complete a manuscript. I sat down and started to write. I wrote on bleachers, in the car, while my family watched TV, while I was at lunch at work. It was my heart in ink. I was actually going to BE the writer I always knew I was meant to be. 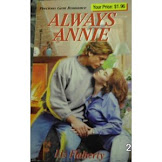 The book didn't sell. Neither did the next one. Or maybe the next one--I don't really remember how many I wrote before the Kensington editor called me and said she'd buy Always Annie.

Since those first ones were written in the days of electric typewriters and, eventually, floppy discs, I don't have any of them anymore. What a loss--to exactly no one.

I once had orange hair for a while--no matter what color I tried to hide it with, the orange came back up like highlights on a chia pet. While I love to sew, I've made more than one project that never saw the light of day. I plant flowerbeds even fully knowing there's never been a flower or a plant yet that liked me. (My mother and mother-in-law insisted you couldn't kill philodendrons. Lynn, my sister-in-law, said you couldn't kill cacti. Sure you can.)

The road of my life, which is pleasingly long, is paved with loving people, getting to be a mom, a nana, half of an equation called marriage, and a writer. There are lots of friendships there, and hard divots where some of those relationships have been lost. Other losses are so intense they're speed bumps that go all the way across the road and are nearly impossible to cross.

There are also a whole bunch of patches where the failures were. I suppose if I really gave them more time than it's taken me to write this column, I'd be cringing over them, but they were lessons. I sew better now. Write better. I don't bake better pies or grow better flowers, but I keep trying because it's fun. It makes me laugh.

The only real failure, a lot of people have said, is in not trying. The rest of the oopses are just practice, and if you learn from them or get to laugh at them, the road is smoother and the ride sweeter for the effort. And there it is. The whole reason for writing about failure. And the reason for keeping on trying.

Have a good week. Fail at something. Be nice to somebody. 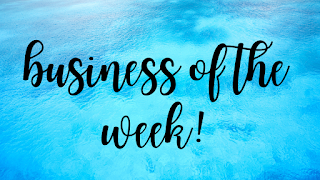 Since I didn't talk to anyone before doing this, I don't have any statistics or interviews to go with it. However, this week's business is Hairtique & Fountain Blues, a hair salon at 24 South Broadway. Owned by Pam Poff, the five-station salon is also the work home of Denee, Cindy, Abby, and Megan.

Prices are competitive and coffee and conversation are on the house. The shop is appointment-only during Covid, and masks are required. The phone number is (765) 473-6350. 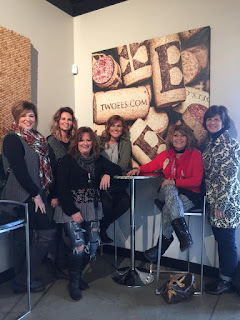