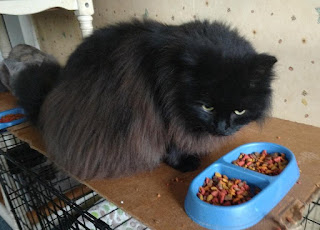 Chances are that at least half of you reading this will relate to it since cats are our most popular pet and 47% of homes have at least one. Cats are unique, mysterious animals. Being the owner of three of my own, I attest to the fact that like ours, no two or three are the same.

We also have OUR baby, Zoey. She is just two and I rescued her after someone threw her out of a truck in a box when she was a kitten.

Finally, there is ALAN’S cat – Louis Faragon the 3rd – Louie for short. When a friend of a friend had to suddenly move and couldn’t take him along, we adopted him. Louie was four when we got him and is eight now. 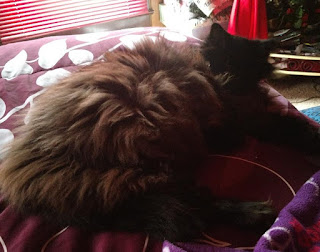 All of our cats are indoor/outdoor cats. We let them out nearly every day for a few hours unless it’s storming or below freezing. I think the longest any of them has ventured away is a day or so in the summer. Right after Thanksgiving in 2016, we had a few warm days, so out went the cats. One of those mornings that they went out, we didn’t see any of them until dusk. Roxy came meowing at the door and came in with Zoey dashing after her. But no Louie. But no worries – he’d be around by morning.

Only he wasn’t. And another day passed. And another. By the third day, Alan was worried. I even believe that Roxy and Zoey were trying to find him. They would want out all the time and would sit in the back yard looking for him. I kept saying, “He’s a cat. He’ll come back when it gets cold again. He’s probably found a lady cat,” and more excuses. When a week came and went, the cold returned. I was worried, too.

Did someone take him? He’s a beautiful long-haired black cat. Had something happened to him? Was he hurt? How do you even go about finding a missing cat?!

We made flyers and hung them all over the neighborhood. As it continued to get colder, Alan would bundle up and walk block after block searching and calling his name. A friend of ours, from Miami County MonthlyNews, ran across a flyer and offered to do a FB video (attached) and post it.

Two weeks later, Christmas came and all the grandchildren were asking Santa to bring Louie home. The temperatures plummeted to single digits. No Louie.

We offered a reward, waited and then raised it. All of our friends were helping spread the word and Louie’s picture. One, who works at the local radio station, began making announcements. It seemed like every time someone saw a black cat, we’d get a call and go check it out. We saw a lot of black cats, but no Louie.

It became so cold that schools were cancelling. There was a stretch of below-zero days. I think it might have been around that time that I began to feel like we wouldn’t see him again. Yet Alan never gave up hope. No matter how cold it was, he still looked every day.

Around the two-month mark near the end of January, Alan hung up fresh flyers. There had been no possible sightings or leads in weeks. My heart sank watching him as he went back through the process.
There was no way Louie had made it through that freezing stretch unless someone had taken him and wasn’t giving him back.

One night in late February Alan and I were in our PJs getting ready to sit down in front of the TV to relax. I had gone online to check messages and the first thing that popped up on FB was a post by the Scratching Post Cat Rescue saying they thought someone may have seen our cat! I quickly responded, asking if they had a picture. I was afraid to mention it to Alan until I saw it. About 15 minutes later there it was – it really looked like him! I showed Alan the picture and we both came to the conclusion that it probably wasn’t. After all, we live on the far west side of town and this cat had been found on the far east side.

Then the phone rang. It was the Scratching Post. The people who had taken the picture called them back and said the cat was in their back yard right then. If we wanted to come by and look, they would wait up on us.

When Alan arrived at the house, he circled the street and alley half a dozen times. He didn’t see a cat, but remember, Louie is black and it was late at night. Finally, he just parked in the alley behind the house and sat…and waited. I was at home becoming anxious. We texted back and forth. The more time that went by, the more I feared it was another false sighting - another disappointment for my heartbroken husband.

Just as Alan was about to give up and drive back home, he saw a cat’s eyes behind a bush at the edge of their yard. He quietly stepped out of the car and called, “Louie, Louie is that you?” The cat came out from the bushes, started to run toward him and suddenly stopped. He called out again. The cat took a few more steps toward him and then darted up toward the house, running under the deck. Alan called me and told me to call them and ask if he could come up toward the back door.

As he approached the house, they turned on their back light. Alan could barely see the cat hiding under the deck. The woman then began telling Alan the story of how they had spotted him. Two days earlier, they had come home and found him scratching on their sliding glass door. Being animal lovers, they opened the door, but he wouldn’t go in. They thought he must be a stray, looking ragged and matted. Because they had a cat of their own and often put out food for the neighborhood cats, they offered him a dish of food, which he devoured. When he came back the next day, they called the Scratching Post asking about a missing black cat they’d heard about. That was when the Scratching Post went to work looking for the man who had been looking for his cat for months – Alan.

As they talked, the woman went inside to grab the cat food. When she walked out and started to pour some into the bowl, the cat came out from under the deck. Alan saw him and said, “Louie, is that you?” Louie came right to him and Alan scooped him up, tears flowing down his face. It was Louie! Alan thanked the woman over and over. When her husband came out, Alan was stunned to learn that that he’d met him at Dillinger’s where he worked. Both the man and his wife had seen Louie’s pictures months before in the bathrooms at Dillinger’s, not realizing he belonged to Alan.

In the mean time I was still at home waiting. I heard Alan come in the back door. He came walking toward me with Louie in his arms – he was alive! We both showered him with love. He had survived three months outside in the bitter cold. He was so dirty that he looked gray instead of black. His hair was matted in clumps all over his body. Soon after we let him down, he went straight to his water bowl and drank every drop.

Over the next several days, Louie slept constantly. Both Roxy and Zoey seemed content to have him home. They would get up on the bed and sleep next to him. Alan worked on his fur, cutting and brushing until he’d made enough leeway to finally give him a bath.

Statistics show that cats can find shelter in small places. They can survive the cold due in part to their fur and small body mass. They stay alive by staying awake, keeping on the move and eating small scraps they find. We sure wish Louie could tell us about his time away. We tell him all the time about how so many searched for him and about how his Daddy never gave up on bringing Louie back home.