This is from August 17, 2015. I was still so pumped when I wrote it--I got pumped again when I found it to reprint it in Window Over the Sink. I am so glad and so grateful to have come of age when I did, with the songs that were my sound track to adulthood. There are some things that no amount of revisionist history can lessen and the music of the 60s is one of them.

“I say in speeches that a plausible mission of artists is to make people appreciate being alive at least a little bit. I am then asked if I know of any artists who pulled that off. I reply, 'The Beatles did'.” ― Kurt Vonnegut Jr.


I was 13 when the Beatles came to America and to the Ed Sullivan Show to nestle into the hearts of so many of us. I bought all their records and tried to grow my frizzy brown hair out long, straight, and sleek. I sat through A Hard Day’s Night at least 10 times, but I never got to go to a concert. I was, in the vernacular of the day, a Beatlemaniac.
That left me sometime after the White Album and prior to the birth of my first child, but I’m still unable to stand still or be quiet when an early Beatles’ song comes on the radio.
Well, shake it up, baby now—twist and shout...c’mon, c’mon...
Oh, excuse me.
Last night, we went to see 1964 The Tribute perform. We were in 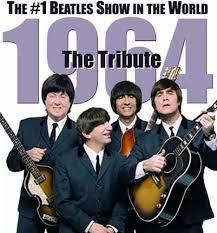 nosebleed seats and, in truth, didn’t expect all that much because, of course, we were there for the whole, real thing, so what could possibly...
Oh, yeah, I’ll tell you something...I think you’ll understand...
And then I did. Understand, I mean.
Most of us in the huge crowd were baby boomers. We remembered JFK, Martin Luther King, and RFK and their lives and deaths. We remembered “one small step for man, one giant leap for mankind” and Peace not War...
All we are saying is give peace a chance...
Only they didn’t, of course, give peace a chance. We remember Vietnam, too.
A lot of us wore flowy things in the 60s. Long floaty skirts with sandals and shawl-type things over tank tops. No bras. Last night, a lot of us still wore flowy things. Only now we do it because we’re shaped differently and flowy works well with the changes. Not only do we wear bras, many of us won’t leave the house without underwires.
Pride can hurt you too...apologize to her...
Oh, God, I love this music!
Duane and I were alone at the concert, but we weren’t. Not really. All around us, everyone knew the words. When to clap. When to stand. When to laugh out loud and say...
I was so much older then. I’m younger than that now.
Oops, those are Dylan lyrics. But they fit.
I would have loved a Beatles concert in the 60s, but no more than I loved the Tribute concert last night. Because the mechanisms you use for thinking and feeling and listening are honed and tightened by age and the intensity of those particular processes is excruciatingly wonderful to experience. I know I talk about age too much here—that’s because I know so much about it. And because it’s such a lovely thing.
I’m always surprised when people don’t believe in happily ever afters, when they don’t believe love ever lasts, when they don’t know what an enormous gift life is. Maybe it is because they don’t write romance or Yes I Can women’s fiction—or maybe it’s because they don’t read it.
I hope you do one or the other or both, and that as life goes on you focus on how glorious it all is. Now to the question—I know, there’s always a question, but what musical group affects you the way the Beatles still do me? Have you seen them in concert?
Have a great week!
Posted by Liz Flaherty at 5:00 AM