This was written in December of 1992, I think, but I'm not sure. The numbers don't always add up right. We've gone up a half-bath since then and I've given up combing my hair in front of the toaster, but it's good to know it's still there for back-up when the kids come home to visit. 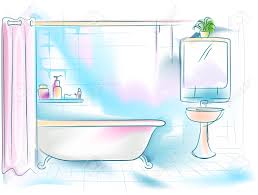 For the past 14 years, we've lived in a big old farmhouse back a bumpy lane. It is the perfect house for us, with plenty of bedroom space, a laundry room that doesn't require me to climb steps with the 15 or so loads of clothes I wash each week, and a kitchen where people like to congregate. It also has one teensy, tiny, hole-in-the-wall bathroom.

When a house contains three teenagers and two adults, which this one did for a number of years, that one bathroom makes for a lot of ugliness.

Regardless of groundless rumors and old wives' tales, men rather than women are bathroom hogs. After all this time of brushing my teeth at the kitchen sink and combing my hair in front of the four-slice toaster, I feel qualified to make such a dramatic statement. In the time it takes for my husband or one of my sons to wash his feet, my daughter and I can both take a shower; shave our legs; wash, dry, and style our hair; and read a chapter in the book that always lies on the back of the john.

The men of the house, naturally enough, deny this. It is easy for them to do so, as they have not spent entire days of their lives sitting on the stairs outside the bathroom door praying for the little room's occupant to come out on a wave of steam and Irish Spring so that they can make a mad dash for it before their father or son or brother appears to take up residence for the next 45 minutes. (Yes, that's really one sentence. My writing's come along some since then.)

It was terrible in the days when none of the kids drove and we all actually went places together. The scenario went something like this.

My husband looks at his watch. "We don't have to be there for three hours."

Like any other idiot, I agree and decide to wait.

6:30 PM. First son goes into bathroom to comb hair. He is joined by second son and their father.

6:45 PM. Family gets into car to leave. Mother is still dirty and isn't wearing any makeup. Daughter is combing her hair in the car. She smacks a brother in the eye with a brush-driven elbow and third world war ensues. Husband and sons look very nice. Mother is ticked off. Big deal. What else is new?

It's not so bad anymore, with one of the sons grown and with a bathroom of his own and the younger two away at college. Since I get up at 3:30 in the morning, it's usually no problem if I stay in the bathroom for a whole 20 minutes if I want.

But then Christmas break came along. I got up the other morning and stumbled in my usual way into the living room, trying to get my glasses on straight and find my way to the coffeepot.

And there is my younger son, on the couch in front of the television. When he saw me, he flinched, never having realized people really looked like that in the morning, then he got up, turned off the TV, and greeted me.

And went into the bathroom.

I brushed my teeth at the kitchen sink, combed my hair in front of the toaster, and dressed in the laundry room. Sometimes there's no sense in fighting the battle when losing the war is a sure thing.

Email ThisBlogThis!Share to TwitterShare to FacebookShare to Pinterest
Labels: #Liz Flaherty, Window Over the Sink