If You Woke Up Rich... by Liz Flaherty

From  Peru Indiana Today in February of 2018. 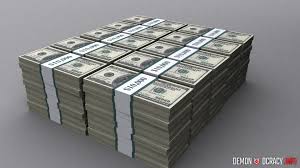 There was this meme on Facebook today that said, basically, if you woke up with 500 million dollars in the bank, how would you quit your job? I've been thinking about it ever since I saw it. And I can't help but wonder about something.
Why would you want 500 million dollars? Why would anyone? I mean, I definitely get wanting or needing more money than you have. We raised a family in fear of emergencies, because we never had that nice cushion in the bank that was recommended. Eating out was a Big Deal because we couldn't afford to do it very often. Paying book rent at the first of the school year for three kids meant robbing Peter to pay Paul until things fell back into place along about November, just in time to shop for Christmas. More money would have been nice.
It still would, I guess. But, if you're not going to give it away or help someone who needs it, what is the point of having a lot of money? Maybe I have been luckier than many in that I've liked my jobs, both the one I retired from and the ones I have in retirement. There's nothing more fun than writing books, not much that's more fun (for me) than working in a library.
If I had 500 million dollars...no, even if I had five million dollars, how would life be any better? I suppose the house would be bigger and have more bathrooms. Maybe I wouldn't compare prices at the grocery store or book the cheapest flights or drive my car until its wheels threaten to fall off. I'm pretty sure I wouldn't clean my own house anymore and I know I've always said if I were rich, I'd sleep on clean sheets every single night. I might spend more on clothes. And closets. I'd give more.
But I'm not sure what I'd do once I was finished...you know...not doing what I do now. I don't think sunrises or sunsets would be any more beautiful, my cats more accepting, or my friends any better. I think relationships might change in crumbling, scratchy ways that would cause pain. I think there are people who would decide they liked me because I was rich, and...really, is that a good enough reason?
So, okay, if I wake up with that 500 million, you can have it (except for a little bit--I'm not entirely stupid) and I'll just keep the life I have. But I'd love to hear your answers to why you'd want that much money in the first place.
Thanks for reading. See you next week.
Posted by Liz Flaherty at 5:00 AM