Just for a little while... by Debby Myers

Debby Myers joins us this week with an interesting look at a timely topic. 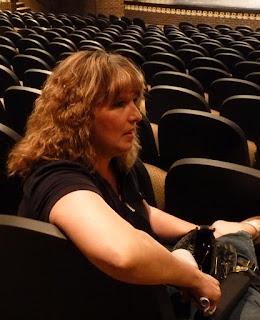 A Baby Boomer is a person born in the years following World War II, when there was a temporary marked increase in the birth rate. They have a strong work ethic and aren’t afraid to put in a hard day of work. They are independent, competitive and goal driven. Baby boomers are said to be the most disciplined generation of the last century. This best defines me. I am a Baby Boomer. The group of us born between 1946-1964. Well, I guess I’m a baby boomer, sort of. Born in 1963, I am right on the cusp of also being in Generation X.

Generation X is the demographic following the Baby Boomers with birth years ranging from 1964-mid 80’s. This is my oldest daughter’s generation and she, like me, was born on the cusp in 1983. This generation is skeptical of authority and tends to disrespect hierarchy, status or title. Generation Xers prefer an informal, fun workplace where they can be self-managing. Finally, they are defined as often cynical, pragmatic "unfocused twenty-somethings," the Friends generation: rather self-involved and perhaps aimless...but fun. This best defines her.

So, why am I defining these two generations? Because of me and my daughter. Because I find myself in the same position as many Baby Boomers. My Gen Xer has come back and is now living at home again with me and my husband. It’s not only her, but also my two granddaughters. I’m sure many of you reading this can relate. My daughter first left home the day she turned 18 and hadn’t even graduated yet. She moved in with her older boyfriend, who would later be her husband. My daughter turned 36 this month, and she will tell you herself that her life is nowhere near what she’d like it to be.  She is a true Gen Xer―I’ll remind you…skeptical of authority, cynical, unfocused and self-involved.

Don’t get me wrong – I love my daughter. She is my first born and I want nothing more than to help her and I have been most of her life. I want her to have all the things she needs to succeed. I have been in her situation. When her father and I divorced, I had two young daughters that I had to care for. I was living out of state and I also had to move back in with my parents. But for me, it was very temporary. I stayed three months, got a full-time job at a fast food place, and got a government subsidized apartment and a junky old car to get me by. For me, even that was temporary. I moved up at work, rented a house, bought a new car and was able to afford to put her, my oldest daughter, in a great preschool. A true Baby Boomer―I’ll remind you…strong work ethic, independent, disciplined.

My daughter asked to come home for three months and has now been here for two years. She still doesn't have a home or a car or a clear path. I keep asking myself WHY? When I ask her, she tells me she’s doing her best and she has bad luck. Oddly enough, when she says it, I think that’s honestly what she believes and maybe I do, too. I become sympathetic―I begin blaming myself and feel like I failed her. Gen Xers were the first generation of latch key kids. I had to work most of her life.

All of this leads to the question―are my daughter and I victims of a generation gap? The gap is defined as a broad difference in values and attitudes from one generation to another, especially between parents and children. I would say the answer is a definite YES. But is it my fault or is it hers? Maybe it’s no one’s fault. It’s the gap.

My other two children are in Generation Y―the millennials born from the mid-80s to mid-90s. They are defined as a generation constantly plugged into technology, having been born into a world of smart phones, laptops, tablets, and gadgets. These are an essential aspect of their lives. They prefer to communicate via email, text, social networks. Gen Y likes flexible work schedules with family life taking priority over work, but they are not lazy. They grew up with overworked parents and strive to focus on their children. Teamwork is high on their agenda. Gen Y wants feedback, gratitude and recognition. And they give it in return. I don’t seem to have any problems with my Gen Y children. Sure, they both have had their problems too, but they both now have great lives: jobs, families, homes, cars.

So, in discovering all of this, how do I bridge that gap between a Baby Boomer and a Gen Xer? With the differences in lifestyles, habits, likes and dislikes, work ethic, it seems tough. And it’s no secret this gap widens by leaps and bounds as the parent grows older. This lack of understanding of social, moral, political, musical, sartorial or religious opinions leads to a lack of acceptance, which is the primary reason parents and children have conflict. Experts say that as the parents, we should be the ones to communicate, be open minded, learn to accept, listen, and understand. And remember sometimes silence is golden.  We have to let our children voice their opinions and listen to what they are saying without interrupting them. Let’s practice what we have always preached. We need to try to understand how they see the world, because chances are, they will never understand the world we came from and they don’t really want to.

So, for all of you parents out there who say things like “I just don’t understand my children,” “They won’t listen to me,” “When I was your age…,” or even “Why can’t we just get along?” these are a few reasons to think about. In my own pondering, I’ve decided to enjoy my daughter and granddaughters while they are here and be hopeful their lives will take a turn. Make sure they know that we love them. Let them learn from us while we learn from them. After all, the granddaughters are Generation Z. I wasn’t sure I wanted to even look this up! But what I found is they are said to be loyal, compassionate, open minded. They are also multi-taskers. They aren’t as apt to look ahead to college and are more interested in going right into the workforce.

All I can say is the famous quote…time moves on.