Welcome back, Brad Ferguson, with Part Two of "That Damn Hot Rod." Thanks for visiting the Window!

One Saturday morning around a quarter after eight, Frank and JD pulled up and tooted the horn. He didn't really have to honk the horn―I had heard him way before he got here! Pete said, "See ya later, Dad."
I saw them loading the lawnmower and hedge clippers in the back of Frank's pickup and Frank drove off with Pete right behind him. I figured Pete had two or three yard jobs that day and needed the help. I also wondered if JD was gonna be worth anything helping them. Ya see, earlier that summer, JD was caught egging cars and stealing hubcaps. He spent a month in the State Juvenile Detention Center. I did notice that JD was now wearing a regular shirt, his hair was cut off and in a flattop, and he was not wearing sunglasses. Maybe he learned his lesson and had straightened up. Time would tell.
I needed to go to the hardware store around 10:30 that morning to pick up a couple things. I got the wagon out and was heading down South Maple Street. I look up ahead and there was Pete's coupe and Frank's pickup parked right in front of old man Zimmermann's place. The Mansion is what I called it.
Now old man Zimmermann―that's a story to itself! He had started up the Ford dealership in the city around 1930. Called it Zimmermann Ford. He had built up the business through the years and it was now the second largest Ford dealership in the state. A real accomplishment there. But failing health and a gimpy leg had made him retire earlier than he would have liked to, so he handed down the dealership to his son Bob a couple years back. Some guys have all the luck.
Old man Zimmermann was kinda eccentric―the only car he owned was a black 1934 Ford Crown Victoria. He could have afforded a brand new top-of-the-line vehicle every year if he had wanted to―he had the money―but he kept the '34 and it was always clean and ran like a top. 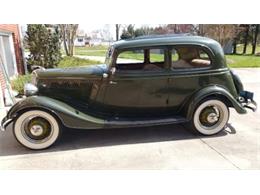 Email ThisBlogThis!Share to TwitterShare to FacebookShare to Pinterest
Labels: #Window Over the Sink, Bradly Ferguson