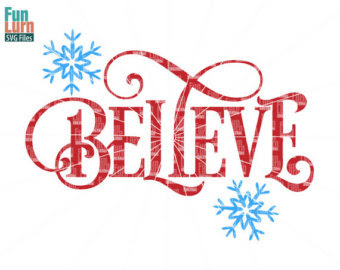 I don't know when I wrote this, but it's a repeat from last year. The grandkids mentioned near the end are 21 and 22 now, so it's been a while, but I was happy to find it. I hope you enjoy it. I hope you believe. Merry Christmas to all of you, and thanks for continuing to read the Window Over the Sink.


Faith is believing in things when common sense tells you not to. - Fred, in Miracle on 34th Street

I'm a Christian, so believing in and embracing the “reason for the season” was never an issue. I have three older brothers, so believing in Santa Claus was an issue. In short, I never did. In our house, by the time I came along, Santa was a mythological folk hero portrayed, as Susan said in Miracle on 34th Street, by a “nice man with a white beard.” I liked him, I wanted him to be real, but I knew better. Some part of me wondered if the reason a lot of classmates got better presents than I did was that they believed in St. Nick and I didn’t.

Twenty or so years later, my husband and I worked hard to keep our kids’ belief in Santa alive and well. Duane even gestured over the fallow fields we drove past and assured the back seat brigade that the rows only looked empty—they were actually filled with bumper crops of air oats. This peculiar grain, which grows only where there are children to imagine it, is what reindeer eat that allows them to fly.
One Christmas Eve, we drove home from my family’s celebration through a Christmas card display of falling snow—great fat flakes falling straight down. Although it was only late afternoon, it was dark. The car was full of gifts and goodies and excited children.
Duane saw the movement from the side in time to pump the brakes gently and slow to a crawl. Allowing the cluster of antlered deer to cross in front of us to the field on the other side of the road.
The kids fell silent. Watching.
“They’ll be working tonight,” said Duane.
“Uh-huh.” As usual, I had a brilliant rejoinder to add to the conversation.
“Filling up on air oats before they go out,” one of the kids offered.
“Uh-huh.”
I know the deer were whitetail, not reindeer. I know the only thing the field produced that night was a few inches of snow. I know that Duane and I did the Santa job later on that night, laughing and wrapping and eating his cookies and drinking his milk. I know all that, really.
A year or two ago, I was driving somewhere with grandsons in the car. I don’t remember how old they were, only that there was more than one and it was wintertime. One of the boys lifted a hand, gesturing toward the field we passed. “Look,” he said. “Air oats.”
I don’t care what I know—I believe.
Posted by Liz Flaherty at 5:00 AM