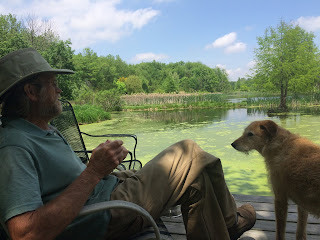 There is a groundhog in the cover crop today.  We've been seeing him for a few weeks now, generally around the noon, feasting on the newly emerged radish and cereal rye.  I suspect this activity will come to an abrupt end if the weather forecast holds; snow tomorrow, followed by unseasonable cold.  Today the hog is working beyond his usual hours, laying on fat in preparation for the long winter’s sleep.  He apparently knows the forecast as well.

The groundhog is being proactive: acting before a situation becomes a crisis.  It

is responding to an anticipated event, which is winter, by ensuring it has laid on enough energy reserves to carry it until spring. If he were reactive, eating only what was necessary when the mood hit, he would one day soon find himself out of food and short of fat.

If a tree does it, then being proactive apparently requires little critical thinking. In nature, it is the result of eons of adapting and evolving, reacting to cues that are life changing or threatening.  It is the product of a lengthy process that bears impressive results.  That's not to say the process has gone uninterrupted. Dramatic, sometimes planet-wide disturbances have occurred over geologic time. Existing proactive measures were sometimes inadequate and entire species, even taxonomic families, were lost, and the slow, lengthy process of filling vacated niches with new life forms would begin anew.

A planetary disturbance is happening again and this time man, that singular species most competent in critical thought and most capable of proactive behavior, is responsible.  Our systematic destruction of earth’s balanced atmosphere has earned us a new title in the epochs of geologic time: the Anthropocene, and this new era has seen the launching of the earth’s sixth mass extinction.  A recent report by the World Wildlife Fund says globally, we’ve lost half of our wild animals in the past 40 years.  Freshwater ecosystems have declined by 75 percent during the same period.  The study looked at only vertebrate populations, but separate published research showed insects declining 45 percent in the past 35 years worldwide, and up to 75 percent in German nature preserves.

Contrary to the perceived abundance we may hear and see daily-- the bird songs, the flowers, the chorus of night insects-- facts are facts.  The studies are not fictitious, no more than running out of gas on the highway is fictitious, and neither is remedied if we ignore them.  As one reviewer stated, “It’s okay to freak out now”.  Yet, by all apparent indicators, we are continuing with business as usual, wielding our dominion over the planet, worried little of food insecurity, mass starvation, unprecedented displacement of people from climate induced disasters. Instead we look forward to the next new iPhone and support fossil fuel consumption at every turn.

We have a one way relationship with this planet.  Earth doesn't need us, we need it.  At our disposal is the technology and wherewithal to influence the end game, to heal the scars, to leave future generations a home.  It demands an immediate, all-in, proactive approach to sustainable energy and lifestyles. We are capable, we can save ourselves, and we owe it to the planet that has given us everything.

And that groundhog, the birds, the insects? This is beyond their proactive capabilities. Their future is on us, too.

A groundhog lays on the fat
For a long winter’s nap
The birds southward wing
To await the coming of spring
Proactively they choose their course
While man, with his critical thinking,
Burns carbon without blinking,
With nary a hint of remorse.