We can go down now. 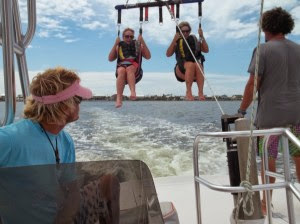 The silence is eerie in its completeness. I don’t know where the panic-induced adrenalin has gone, because it was noisy in and of itself, but it’s curiously absent. I’m calm and unafraid. Well, not calm—we’re 600 feet in the air, for God’s sake, dangling precariously from a harness without a seat. There’s air buffeting us around a bit. It feels…nice. Scary. No, just nice. I never think of exhilaration as being silent but it is right now—silent and joyous. Is this what dying is like? I wonder.

“Okay,” says Lynn, my sister-in-law and partner in crime—for whom height is an issue, “that’s enough. We can go down now.”

I wrote that five years ago. I was 62, Lynn was 59, she has a heights issue, and I’m terrified of water. These all seemed like viable reasons to go parasailing. So we did.

I was fairly new to being retired and terrified of what I was about to become. Retired people didn’t work anymore, did they? They watched television, complained about their health, and drove too slow in the left lane, right? They used the term “fixed income” as though it was confined to them. They got percentages off at stores and restaurants, but never got their wallets out until the cashier told them how much they owed. They went through the 15-items-or-less checkout with a full cart because, as one man told me while I stood behind his week’s worth of groceries with my bread and milk, “You can wait. I’ve worked all my life. I’ve earned this.”

That day in the store, while the guy took his time (and mine) because he'd "worked all his life," not the one when Lynn and I were strapped into harnesses and lifted high in the air, was the life-changer. It was the one that made me decide what kind of old person I intended to be.

I would be the one who counted her items before she used the express line, the one who drove at least the speed limit and stayed in the right lane unless I was passing someone. I would only watch TV if there was absolutely nothing better to do and my answer to “how are you feeling?” was always going to be short and positive. I’d take my senior discounts, but I’d have my wallet out and waiting when I heard the total owed. I was going to keep working, keep writing until they withdrew my keyboard from my cold, dead hands.

It’s not always as easy to do as it is to type the words here—even I will admit that—but it’s not always that hard, either. I can’t write as fast as I used to, but slow is nowhere near the same thing as stopped. I’m not sure how I’d do with eight hours a day on my feet anymore, but I log some volunteer hours and have a really good time doing it. I don’t have any trouble keeping up with traffic, staying on the right side of the road, or knowing which checkout lanes I should use.

Even though parasailing is the rashest thing I’ve done in this new invention of myself, the rude old man’s remark was the life-changer for me. I’m really glad for both experiences.

I still want to go zip-lining. Or maybe make a tandem jump from an airplane. I want to go back to Europe. I’ve learned there are two great words that go along with being retired.