Next week is fair week here in Miami County. It's a lot different from when I was a kid. It's way earlier, for one thing. Smaller. The rides are...I don't know--less? I volunteer out there now, as a member of Extension Homemakers, but we didn't go for a long time. Until this year back in the 90s...

Last night my husband and I went to the fair. We didn't get there until about eight o'clock. We were going to get something to eat, take a quick run around the exhibits, and be home in an hour and a half or so.

After all, we said, the fair Isn't What It Used To Be. We don't ride on the rides anymore, or play the games offered on the midway. Since our kids are all out of school, we can't even look up many of their friends 4-H exhibits anymore. It's just not the same.

When I was a little kid, a hundred or so years ago, the fair took place during the week of my birthday. On one day during the week, not necessarily my birthday, my mother would work in one of the the food places at the fair and I would take my birthday money and run wild until she came and found me and told me we had to go home.

I never got to run wild very often, so I always took full advantage of it. I picked up duckies and won wonderful little bamboo canes. I laid nickels on numbers and went fishing with the little crane and threw more nickels at shell-shocked goldfish. One year, I talked one of my brothers into taking me on the Bullet--I was scared to death to go by myself--and I lost all my money while I was on it and a whole bunch of cotton candy and caramel corn as soon as I stumbled away from it a couple of traumatic minutes later. 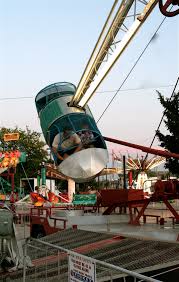 It was probably a good ten years before I braved the Bullet again, and then only after I'd left all my worldly goods with someone intelligent enough to remain on the ground and before I'd had time to eat anything I stood a good chance of losing the hard way.

The fair remained wonderful through my teenage years. There was nothing more romantic than smooching with someone on top of the Ferris wheel or toting home a hideous teddy bear won for you by someone. Another side to that romantic thing was fighting with someone while you were there and having to ride home with your girlfriends while you cried and said you never wanted to see him again. Ever. (Note from 2017. If this happened, I don't remember it. That's either a sign my memory's truly gone or indicative it wasn't all that serious of a relationship.)

But then things kind of changed. The only time we went to the fair was on family day when the rides wouldn't entirely break the bank and the only ones who rode were our kids. Except for when their dad rode the Bullet with them while I held everyone's money and a good supply of wet paper towels.

Pretty soon the kids were going to the fair without us. We would manage to go out one night to eat pork chops and do a quick run through the exhibits and get home in an hour and a half. All the way home, I would complain that It Just Wasn't What It Used To Be.

When we spent some quality time talking to people we hadn't seen in years and remembered how much we miss them.

When I stuffed myself with a tenderloin the size of a dinner plate that tasted just as wonderful as they did that hundred years or so ago I mentioned up there.

When we walked, not ran, through the exhibits and marveled at the talent and hard work of those doing the exhibiting. When we looked up our favorite 4-H members' entries and crowed proudly at their blue ribbons.

When we strolled through the midway and smiled at laughing babies in strollers and their excited siblings on the rides. Their parents waited patiently and tiredly with the strollers, talking to others doing the same, and we knew what they were saying. "The fair just isn't the same anymore."

When we sat in hard chairs in a big tent and watched dozens of cloggers doing their thing. The noise form their shoes was deafening. And rhythmic. And pretty-sounding. The bobbing black ponytail in the front row was captivating, nearly as much so as the smile on the face of the ponytail owner.

Maybe the fair's not the same anymore. But it's still the fair. I hope you don't miss it.

Thanks for coming by. Here's the website for the fair. I hope you go and have a good time. And eat a tenderloin.
Posted by Liz Flaherty at 4:00 AM