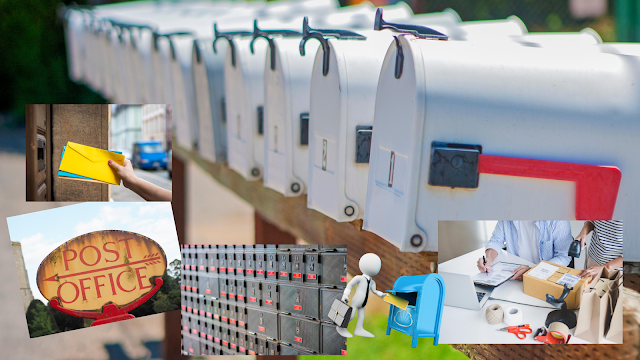 Messenger of Sympathy and Love;

Consoler of the Lonely;

Bond of the Scattered Family;

Enlarger of the Common Life;

Carrier of News and Knowledge;

Instrument of Trade and Industry;

Of Peace and Goodwill,

Among Men and Nations.

I worked for the USPS for 30 years, driving the 27 miles to Logansport every day. When I first started, I made the drive six or seven days a week, sometimes twice a day. It was a good job. Every day I didn't hate it, I loved it. I was tired a lot. I worked hard. Most of us did. Most of the ones who are there now do, too.

Working for and with the public does give you certain privileges not everyone has. Customers were mostly kind, especially the regulars, who understood that sometimes there were lines and we couldn't make them move any faster than they did. They were friendly, helpful to each other, snickering together when one of the people in line would have a long cellphone conversation at the top of his voice. The post office was a neighborhood place.

I remember telling someone once that I was sorry we couldn't provide the service he needed. He said, "I'll bet you are, b****," on his way out. Not quite to my face. I remember the woman who wouldn't take my word for what I'd told her and asked me to ask "the man at the other window." So I did. He asked me what to do. I told him what I'd told her and he told her the same thing in turn. He knew the answer, but he wanted her to understand that I did, too. I appreciated that. I remember the people who came in at 4:59 knowing full well we closed at 5:00 with 15-minute transactions just because they could. I remember all the people who said, along with a shaking finger in my face, "I pay your salary!"

Those were the ones who expected favors. Who wanted postal workers to back-date their tax forms, who wanted to pick up the mail because they were expecting a check, who wanted us to wait for them at the back door because there weren't lines there and, you know, their time was valuable; no one else's was. There were politicians who expected special favors because "do you know who I am?"

But most customers were just you and me. They gave Christmas gifts to their carriers, bottles of water in summer, offers to "step inside and warm up" in the winter. I carried a city route once and stepped out of the postal car to a posse of little boys who wanted to know who I was and "what are you doing with Mr. Wilson's car?"

For all the years of my life--and I remember when stamps were three cents--people have complained when the prices went up. My mother was livid when postage went to a nickel. I recall hating 13 cents because I thought it was a stupid number; why not go to 15 and leave it there for a while? Build up some money.

When I worked there, of course, I found out what I always really knew, which is that the USPS isn't supposed to make money. It's supposed to provide a service. It's supposed to deliver millions upon millions of pieces of mail every single day. If you're required by your insurance company to get mail order prescriptions, they deliver them. No matter where you live or how valuable your time is. And you don't matter any more than anyone else, no matter who you are. Or less. You don't ever matter less, either.

The USPS is so far from perfect that it's not even within the same ballpark with the word. I'm not trying to say it is. What I'm trying to say is that it's a valuable service provided by a dedicated work force. If you don't use it or you don't think it matters, that's fine--you're definitely entitled to believe what you wish; however, please give consideration to the millions of people who DO use it. Give thought to the people who need those prescriptions, who count on letters and greeting cards, who'd rather their bills came in paper, who don't have all-electronic access. Who just like the post office.

Thanks for listening. Buy some stamps and send someone a letter--they'll love it. Have a great week. Stay safe. Be nice to somebody.