Meant to Be by Nan Reinhardt #WindowOvertheSink 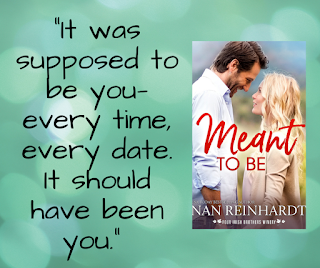 Can a near-tragedy help two best friends realize they’re meant to be so much more?

Best friends since grade school, high-powered Chicago attorney, Sean Flaherty, and small-town mayor Megan Mackenzie have always shared a special bond. When Sean is shot by a client’s angry ex, Megan rushes to his side, terrified she’s about to lose her long-time confidant.
Upon his return to River’s Edge to recuperate, Sean discovers that his feelings for his pal have taken an undeniable turn for the romantic. While Megan struggles with an unfamiliar longing for Sean, she worries that he may be mistaking a safe place to land for love.
Can Sean help her realize that they are truly meant to be so much more than friends?

Meant to Be Excerpt

Meg was afraid to ask, but she did anyway. “What happened?”
“Sean’s been shot.” Sam crumpled back into the booth, sobbing.
Megan gasped as bile rose in her throat. She couldn’t even comprehend Sam’s words. Sean was shot? The invincible Sean Flaherty? Her buddy? Her best friend? His handsome face flashed into her mind—the lock of dark hair that invariably fell across his brow, the blue, blue eyes that sparkled sapphire with wit or turned dark navy with emotion, that killer smile, those amazing Flaherty dimples... impossible!
“What?” She sat down across from Sam. “Shot?” She could hardly catch her breath. “When? Where?”
Sam grabbed a napkin from the dispenser on the table and swiped at her eyes. “I–I don’t know much. Charlie Smith at the firm said it happened right outside the courthouse in Evanston early this afternoon. Some crazy woman. The wife of his current client. They took him to Northwestern; he’s in surgery right now.” She took a shaky breath. “Conor’s driving up to meet Aidan and Brendan at the airport, then they’re heading to the hospital.” She covered her mouth with both hands as if that could stop her lips from trembling, then shuddered. “Dear God, Meg.”
Megan closed her eyes, trying desperately to banish the dreadful pictures in her head—Sean on a gurney, pale and bleeding—and replace them with ones from the last time she’d seen him—grinning and pouring sparkling wine on New Year’s Eve.
They’d hugged each other at midnight because neither of them had had a date, and Sean had pressed his warm lips to her forehead. “You’re the best, Megs,” he’d murmured and held her close to his brawny chest for a long moment. She felt the even beat of his heart under the navy sweater he wore—the one she’d knitted for him for Christmas that made his eyes look deep blue.
“I’m going up there.” Megan stood and gazed at Sam. “I have to, Sam. He’s my oldest and dearest friend. Maybe there’s nothing I can do, but I can spell the guys at visitation and maybe, I dunno, give blood or something. I just know I can’t stay here. I’ll go crazy. I have to see him.”
Sam stared at her silently, then sighed. “Come on. Let’s trade cars. I don’t trust your old beater to make it to Indianapolis, and you sure as heck can’t ride Big Red all the way to Chicago.”
***


My friend Nan Reinhardt is a USA Today-bestselling author of romantic fiction for women in their prime. Yeah, women still fall in love and have sex, even after 45! Imagine! She is a wife, a mom, a 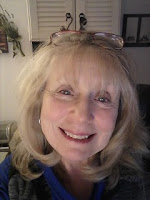 mother-in-law, and a grandmother. Nan has been a copyeditor and proofreader for over 25 years, and currently works on romantic fiction titles for a variety of clients, including Avon Books, St. Martin’s Press, Kensington Books, and Entangled Publishing, as well as for many indie authors.

Visit Nan’s website at www.nanreinhardt.com, where you’ll find links to all her books as well as blogs about writing, being a Baby Boomer, and aging gracefully…mostly. Nan also blogs every sixth Wednesday at Word Wranglers, sharing the spotlight with five other romance authors and is a frequent contributor the RWA Contemporary Romance blog, and she contributes to the Romance University blog where she writes as Editor Nan.

Email ThisBlogThis!Share to TwitterShare to FacebookShare to Pinterest
Labels: Meant to Be, Nan Reinhardt