Blackberries are Red When Green by Keith Frohreich

I want to welcome Hoosier writer Keith Frohreich to the Window today. I love his answers to these interview questions and appreciate the time and thought he put into them. 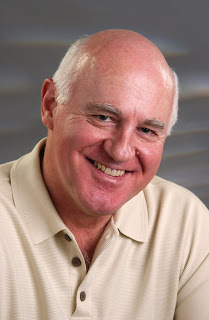 What, in your opinion, are the most important elements of good writing?

A good story. A POV. Research. Believable characters. Dialogue consistent with age, gender and ethnicity, meaning, for example, do not put big words in the mouths of a 10-year-olds. At least one character the reader likes. When I began writing, a friend gave me this saying, “If you can’t see it, touch it, smell it, taste it, or feel it…it shouldn’t be on the page.”

When did you consider yourself a writer?

I am still a work-in-progress. Writing is an avocation. My career was in marketing and advertising. Someone once said that marketing people notice what we notice. That rang true. I am a pretty good observer of what is going around me. I am a people watcher. The question was could I capture it on the page. It began slowly with the columns in the Logansport Pharos Tribune in the mid-1990s. After retirement I devoted more time. I stuck with what I knew or what I observed. My interests were, and still are, quite varied. I was afraid of fiction.

With “Blackberries Are Red When Green,” I feel I became a writer.

What do you do when not writing?

Cooking, traveling and disaster relief volunteering. Toss in some long distance grandpa joys – our grandson is French and lives there. In the past 14 years I have devoted nearly a half a year to disaster volunteer projects, beginning with New Orleans, post-Katrina. Most recently I flew to North Carolina in the aftermath of the hurricane there. I work with Team Rubicon and All Hands and Hearts. Puerto Rico has been in the news lately. I spent two weeks there in the spring of 2018 in the province first hit by Hurricane Maria.

Where are you from and what do you love best about your hometown?

I am a bit of a blend of the village of Adamsboro and the small city of Logansport. My family moved there when I was one and I graduated from Logansport High, a proud Berry. I am fortunate to have been schooled in Logansport. My township, Clay, voted to send their children to Logansport, way before my family moved to Adamsboro. In those days there were at least eight small high schools in Cass County. I was bused for nearly 12 years. I tell people that I was happy to be raised in the area but also happy to leave. In joining Up With People I became a world citizen. In moving to Southern California to pursue my future bride, I became what I call “Ural” part urban and part rural. My wife and I have been married 48 years. In my older years I re-engaged with Logansport and surroundings and saw it for the first time. Doing this proved valuable to my first novel.

Tell us about your favorite character in the book.

This is tough, because there are three pivotal characters, but my favorite is the retired Pullman Porter, Dutch Clemons. I had several objectives with Blackberries Are Red When Green: one was to tell the story of the Pullman Porters. Another was to portray a strong, though flawed, male character. I have been a member of a book group for 20 years, and as such, read over 200 novels, some of which I never would have read on my own. That is what is wonderful about book groups. My book group and the books nurture me. My group knows my proclivities, literature-wise. One is that there are far too few strong male literary characters in US literature. This is not a male thing with me. Truth is I am not a big fan of US Caucasian men lately. But my critique remains. Who are the literary male models for boys/men? You will not find them in Tom Clancy, Robert Ludlum or even John Grisham novels or, heaven forbid, comic book heroes, although Grisham’s characters come closer. After Atticus Finch, I struggle to think of another. Granted, I have only read about 250 novels in my life, and not all are by US authors.

Do you have a favorite saying?

Two are mine: Aim high, swing for the bleachers, but celebrate the small victories. Another is borrowed from a source I cannot recall: life is one long forced march into enemy territory – be vigilant. Finally, another of mine: climb into a helicopter now and then and get a broader perspective of your life. As an added comment here, my favorite cartoon character is Wile E. Coyote. Why? Because he never gives up.

Tell us a little about yourself, including something people might be surprised to learn.

·       I am a very good cook. I kicked my wife out of our kitchen early in our marriage. She left skid marks when she left so quickly. While in my career I mostly cooked on weekends. Nothing special. When I retired, in Emeril-speak, I kicked it up several notches. Food was the heart and soul of my first nonfiction book, Guy’s Guide to Domestic Engineering. Friends call me a chef. I am not. Chefs live in their kitchens. I only move there when I am hosting family and friends. Food is one of life’s enduring pleasures. Food is the venue into another culture or ethnicity. I was an Anthony Bourdain devotee.

·       I write left-handed but do everything else right handed. So, I must be bi-polar. I blame my first grade teacher.

What was your best day?

The easy answer is when I married my wife, but there was another day and it needs a setup. My first hospital assignment in the Army was the White Sands Missile Range in a remote New Mexico base. The hospital only had 50 beds. I became so bored that after six months I volunteered for Vietnam, knowing the movie battle cry scenes of wounded men screaming, “Medic!” Like I said, I was bored. Two months later the personnel officer summoned me to his office and said something like: “Specialist Frohreich, we have your orders for Vietnam. But, we also just received orders for you to go to the 97th General Hospital in Frankfurt, Germany. Which would you prefer?” I stammered, “Sir, I will accept the assignment in Germany.” I cannot not tell you how much that affected the trajectory of my life. It was yuge!

What was your worst day?

The day our third child died in 1985 after just two days. His name was Adam Todd.

If you could spend the afternoon with one writer, living or dead, who would it be and what would you talk about?

Kurt Vonnegut. I guess partly because he was a fellow Hoosier. Was he, like me, in a like/not like relationship with Indiana? Love/hate is too strong of an emotion. What would he think about Indiana today? How did he feel about where he grew up, and what did he take with him into adulthood. Vonnegut is a quirky writer and I like that about him, though I only read two of his books: Slaughterhouse Five and Palm Sunday. There is one quote of his that rings true, “Being a humanist means trying to behave decently without expectation of rewards or punishment after you are dead.”
*** 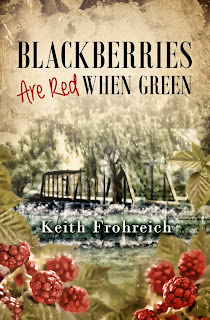 In less than a month in 1960 two murders traumatize the sleepy village of Adams Creek in Northcentral Indiana. Over the three years leading up to the murders, young Kurt Baumann’s world had been rocked by the loss of his dad, his best friend, and his precious dog, leading him to doubt the existence of God.

A year after losing his father, a retired Pullman Porter, and a founder of the Brotherhood of Sleeping Car Porters, Dutch Clemons, moved into a small shack across the river from the small Baumann farm. Change colored the air.
Kurt now had a new friend, a father figure, and a self-educated historian, who disrupted and enlivened Kurt’s segregated life with tales around the supper table, and while lolling the day away bass fishing down the riverbank.
Sharing the farm with his mom and big brother, the family forged ahead on hard work, meager income, and the mother’s faith. 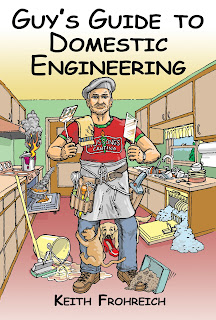 their career attire (voluntarily or not), and strap on aprons and tool belts to cook, clean, launder, iron, and maintain the household physique in handy-manly fashion, while their wife or partner continues to bring home the bacon, which they now cook.


Guys will find their inner-foodie, become accomplished zesters and sauciers and understand the difference between Italian parsley and cilantro without sniffing or tasting. Years later, when asked, "How was your Thanksgiving?" they'll be able to reply, "It was the best turkey I ever prepared!"
Their reward, in addition to becoming a kept man, having access to a live-in ATM, and earning a B.S. in Domestic Engineering, will be gaining the satisfaction of doing the right thing, as real men do. Domestic Engineer Guys also possess a secret; the path to the bedroom travels through the kitchen.
Successful completion of this undergraduate degree will elevate guys to Domestic God status in the eyes of their partner, and to the vaulted new 21st Century male label, Uber Guy.

If you're in the area, Keith will be at the Logansport Library on August 10 at 2:00.

You can find him here.