I’ve discovered that even when I try to write about something that has nothing to do with the COVID-19 virus, or quarantine, or social distancing, it doesn’t work very well. The crisis and all its accouterments are the elephant in every room. So I thought I’d just go ahead and wallow in it, write about it, talk about who and what I miss. About worrying. About fear. I’ve now started this paragraph five times. I’ve spent a lot of time wandering around thinking I should be doing something productive, so maybe that’s what this is. More likely, though, it’s just the sixth try at a column. 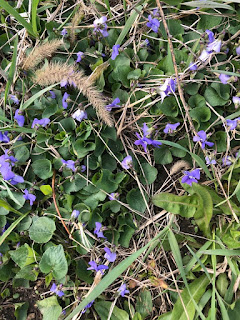 I love the wildflowers on the Nickel Plate. Today it was little starry white things and even tinier yellow ones with the occasional bold and brassy dandelion pushing its way forward, saying, “Here I am, like it or not.” Today, while walking, I saw six people on bicycles. We kept our distance, nodded, smiled, and said, “Hi.”

I’ve baked this week, banana bread and cinnamon roll bread and Grands biscuits and Weight Watchers cheesecake. I’ve done laundry and dishes and cooked meals and gotten out of cooking a few others simply by making a phone call and picking up some really good stuff someone else prepared. Days that are never long enough suddenly are. I am never bored, but for the first time in my adulthood I understand how some people are.

On my grandson’s birthday, the third grandchild’s birthday during the quarantine, we took money to him and handed it to him out the window of the car. There were no hugs involved, but everyone’s heart was, so it was okay.

Writing has been interesting. I’ve had some days when I’ve written more than I sometimes accomplish in a week. There have also been hiccups. There have been paragraphs and full pages written and discarded, written and discarded, written and…sometimes on the sixth time, it takes. The paper that has published the Window went on hiatus and I feel betrayed even though I wasn’t. I think that explains part of the wandering around, though. Part of the inability to complete things.

DeRozier’s Bakery has been delivering doughnuts all over the place. Most area restaurants are taking orders by phone and delivering to your car when you go to pick them up. Grocery stores have special hours especially for at-risk customers. More sewing machines than I’d have thought existed in the area have sewn masks steadily since the need for them first became known.

People are being heroes everywhere we turn. Healthcare workers. Retail associates. Postal workers. Other delivery personnel. Those who are sharing accurate information not colored by politics. Performers who are giving free concerts online from their living rooms, their kitchens, their showers. Teachers who left their classrooms without saying goodbye to their kids are still reading to them from Facebook, answering questions, working on e-learning. Going to meetings on Zoom. And meetings, and meetings, and meetings…

We all worry, but the worries are different for everyone. If a nurse has children at home, how scared is she or he of taking the virus home with them? Teachers can only do so much to educate without a classroom; they can’t be sure their kids are doing the work in their packets or eating regularly. Everything we buy off a shelf or receive by one delivery mode or another has been touched by human hands. Many human hands. Not everyone is careful. I worry because I’m afraid I’ll never be able to hug my grandkids again. I’m afraid my husband or I will get sick and we won’t get to be together.

There are words and phrases being used a lot. Hoax. Living with fear. Social distancing. Masks. We’re all in it together. Good people. The usual people are trolling social media—telling less than the truth, calling names, denigrating others because they can. They’re stirring a pot that is already boiling over with floods of fear and loneliness and not giving a damn.

We are brought to tears, some of us, by unexpected things. Vandals who stole and destroyed signs meant to honor seniors who’ve been robbed of the last so-much-fun months of high school. Virdie Montgomery, a principal who put 800 miles on his car so that he could visit each of his seniors. A picture of a grandson heeling in apple trees in a field. Knowing another grandboy hurt his foot. Music videos.

I’ve been looking for a way to finish this column, this endless sixth attempt that’s much more than a single paragraph. It’s hard because there aren’t any solutions yet.

But we will have church in the building this week, for the first time in a long time, maintaining our distance and dispensing with greeting time. Restaurants will be open at partial capacity soon. Salons are welcoming customers back slowly, one at a time. Be safe. At least as safe as you can, for the sakes of others if not for yourself. Wear a mask even if you don’t like them and don’t think they’ll help—they sure won’t hurt.

I remember a line from a book I read in junior high days. It was Sue Barton, Rural Nurse, and the town of Springdale, New Hampshire had suffered the effects of a terrible storm. (I think it was a hurricane, but you can’t quote me on that part.) Many of the town’s residents spent the night in a church, on high ground. When they got up in the morning, they looked down on the town and its partial ruin and up at the sky, and one of them said, in words like this but maybe not exactly, “It looks like it’s going to be a good day, folks.”

We’re going through quite the hurricane, aren’t we? Some days it feels as if the eye of it is coming straight toward us and we’re going to have to find a way to climb its wall to find safety again. Other days aren’t so bad. They’re times of doughnuts, wildflowers, grandkids’ birthdays, banana bread, and heroes. So many heroes. It’s days like that when we feel like we’ll be able to finish the paragraph and look around and say, “It looks like it’s going to be a good day, folks.”

Have a great week. Stay safe. Be nice to somebody.