Seeds of Age by Liz Flaherty

I changed the bottle in my water cooler the other day and reflected a little grumpily that it won't be long before I'll have to start using three-gallon bottles instead of five-gallon ones because the weight and awkwardness are getting hard to handle.

I've been wearing the same necklace ever since the beginning of sheltering in place because neither Duane nor I can consistently manage to fasten or unfasten jewelry clasps.

When we watch Grace and Frankie, I nod my head the whole time--not just because it's funny but because even at its most unbelievable, it's shockingly accurate.

This morning I needed something from the shed. No, not that shed--the other one, which meant I had to look in both of them. I found the item I was looking for, used it, and went into the house to ask Duane to go out and latch the doors on the sheds because even though I got them open, I couldn't get them closed.

Walking is the only form of exercise I like, and I like to walk two miles; however, I'm tired enough after a mile and a half that I usually just do that. I might add that the mile and a half takes me as long as the two used to take. Or I might not. I might just say that I choose to take more than 20 minutes to walk a mile. What's the hurry, after all?

Our 49th anniversary was yesterday. We talked the night before about the things long-marrieds often talk about. (Actually, I did most of the talking--he nodded sometimes.) Would you do it again? Has it been worth it? What would you change? What if we'd done this instead? The truth is, any change at all--including the times of pain, sadness, and anger that create pock marks on any enduring relationship--would alter the path of our lives together. It might be straighter, but it might not be, too. It would make the climate of the marriage different and put us in a place we might like less instead of more. It's not a chance I'd be willing to take. He wouldn't, either.

All of these things are seeds planted by time. By age. Some of them were surprising--who knew I wouldn't be able to put my own necklace on? Some were expected--walking slower--but not expected already. Later, maybe, but not now.

That whatever necklace I have on has memories and love attached to it--doesn't matter what one I wear or for how long I wear it.

That the women who play Grace and Frankie make no pretense at not being the age they are, nor do the characters they play, and when I'm laughing I don't give any thought at all to how old they are.

People, even ones you aren't married to, will help you with things like door latches. Partly because they feel sorry for you because you're old, partly out of respect for said oldness, and partly because people are generally nice. 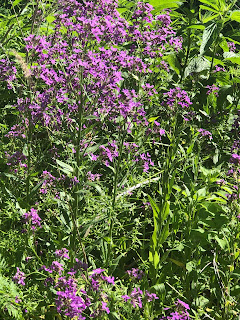 That when you walk slow, you see more wildlife and plant life. You smell the flowers. You hear the birds--although I have to admit I still don't usually know one from another.

That scar tissue, some of the fabric that holds 49-year marriages and other long friendships together, is strong stuff. Made to last if that's what both halves want to happen.

The seeds of age are hard-won and we earn them whether we want to or not. How and where we plant them and what we do with whatever grows from them...well, that's up to us.

Have a great week. Stay safe. Be nice to somebody.