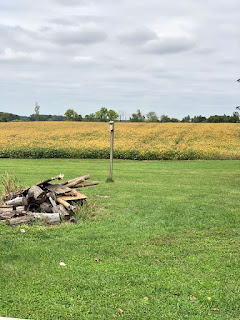 There's been a lot grief in 2020--we all know that. A lot of loss. But it's September now, with cool nights and breezes that sift into your hair and make you smell apples and leaves and bonfires.

It is, I know, a dying, decaying time as the earth prepares for winter, but the bean fields are golden, as are the corn tassels and some of the trees and the quick shimmer of the sun on the river. The colors that begin to emerge in September are bright and burnished and hopeful.

There are golden sounds, too. Performers sharing their music both digitally and--where there's space--in person. The bleachers at junior high and high school football games. 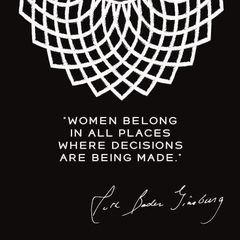 I should have finished writing this when I started it on Friday morning, but I didn't. I had other things I needed to do...and now Supreme Court Justice Ruth Bader Ginsburg has died. For many of us, the colors have dimmed. Rest in power, Your Honor, and thank you.

But this time of year is also about layers. On Tuesday I went to a meeting at ten in the morning, wearing my third shirt of the day. I started hopefully (and foolishly) in a tank top, changed to a sweatshirt, and by the time I went to the meeting, was in short sleeves--with a hoodie in the car because you just never know. Last night when we went to dinner, Duane wore shorts--and a golf sweater.

School's back in session. Football's being played. But the layers are uneven these days, because caution changes things. Disagreement, almost the only constant in these change-of-season layers, makes the edges of the tiers rough-edged and sharp.

I can't seem to come to a good place this morning, and I'm sorry. If you have good news, I hope you'll share it.

Have a good week. I hope you see bright colors and find kindness in the layers. Stay safe. Be nice to somebody.

All Are Welcome by Liz Flaherty #WindowOvertheSink 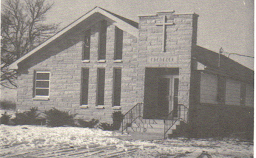 Last week, I got political in the column. Thanks to everyone who read and responded. To the friends I lost because of a stance I took, I'm sorry to have lost you. I wish you happy.

Regardless of the title above, I'm not going to step further into controversy by talking about religion; however, I am going to talk about church. No, about churches. 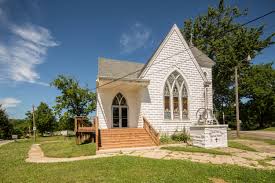 honestly I got out of going every chance I got. Eventually I stopped altogether. Over the years I started again somewhere else. Stopped. Went occasionally. Then went and have stayed. Most of the time. One thing I know now if I didn't know it before Covid is that the church is its people, not its buildings.

But, oh, the buildings. I'm not sure how I would feel about them if I were non-Christian, but I love them. All of them. I've managed to visit at least one in every city I've ever visited. I like the old ones best, the ones where you can feel the weight of centuries of heartbreak and hope when you go through the doors. I am always overwhelmed by the sheer size of the big ones, and usually slide into a pew to do my praying, because once I'm in the pew I'm one-on-one with God again. 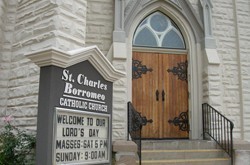 In the wayback, when Duane was in Vietnam, St. Charles in Peru kept its doors unlocked--at least during the day--and I used to go in there after work and light a candle for Duane, dropping a dime into the metal coin box on the table. I'd go to Mass sometimes, too. I don't know if it was because I actually preferred the Catholic faith to my own or because I liked wearing a lace mantilla--women all covered their heads then. 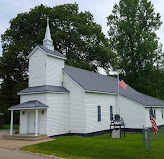 At the little church in Ammons, Kentucky where my mother-in-law grew up, the floor used to slope so much on the left side that leaving the church was like doing a mini-mountain-climb.
The title to this column, of course, is...I don't know, wishful thinking, maybe. Or selective memory. Not everyone feels welcome in every church. Not every church makes everybody feel welcome. There are "Christians" who go to church because they want to be seen there. "Christians" who go to church until they've taken advantage of every avenue of mission open to them. "Christians" who, as Father Hoffmeyer said all those years ago at St. Charles, "Hit the bars, hit the booze, and hit the box [confessional]." He said something else about hitting their knees, but I don't remember it well enough to quote it. There are Christians who aren't Christians.
But I'm not talking about Christians--or I wasn't; I'm not sure how that paragraph happened. I'm talking about churches. About places of worship regardless of the faith they represent. They are way up there on my gratitude list. In action as well as intent, most of them are places of sanctuary, places where they will feed the hungry and clothe the naked (Matthew 25:40). Places that do indeed open their doors to all. Places of fellowship and worship and acceptance and tolerance. It saddens me that so many churches are closed. I'm glad to see some of them being restored and repurposed (thank you, Dave Van Baalen). I don't pretend to know what comes next in religion--I can only take care of my own--but that doesn't make me any less grateful for what I have learned and for the places I've learned it.
Have a great week. Stay safe. Be nice to somebody.

Posted by Liz Flaherty at 1:00 AM No comments:

I kind of knew what would happen. When I posted a picture of my husband and a group of other soldiers from Vietnam in 1970, along with the assurance that they were neither losers nor suckers, I knew there would be a firestorm. And there was. Along with remarks about how young those guys were, there were a multitude of comments concerning the President and how many of us feel about him, and another plethora of observations from people who support him. Many of the comments had nothing to do with the subject at hand, which was a public figure's disrespect for veterans.

They served, some voluntarily and some not, and many are still serving. They have kept us safe for 244 years or so. They serve to protect not only us but our rights, to "support and defend the Constitution of the United States against all enemies, foreign and domestic." They "bear true faith and allegiance to the same."

I don't like that it created such an issue, even though I did it purposefully. Possibly because my politics are unpopular where we live, I don't like to post contentious things. I get my feelings hurt when people say mean things. I get furious when they say things that aren't true. I get defensive...oh, all the time.

But I remember George Wagner. It was the first year of North Miami's schools being consolidated and some of us rode a couple of buses for a long time to get to school. It was a disgruntling time. So the administration made a rule that kids on buses were not allowed to go together and buy their drivers Christmas gifts. The other part of the rule was that the drivers couldn't give the kids treats on the last day of school before Christmas break.

George was one of the best drivers and the best guys ever. So we pitched in our quarters and bought him a present. He told us we shouldn't have done that. And then, one-by-one, as we got off the bus at our houses, he handed us the treats he wasn't supposed to have given us.

Joe Wildermuth, who'd broken his back and didn't get around too well at the time, backed the students when they staged a sit-in at school. I don't remember whether we won or lost the cause we were sitting in for, but I remember Joe standing at the podium in the gym. He had our backs.

Years ago, some books got banned from our school library. My son told me about it, I wrote a column about it, and things got a little uglier than they might have if I hadn't done that. The kids and I lost the battle and the Stephen King book got banished.

I've lost a lot of battles in my lifetime, probably more than I've won. I am a coward of the bravest kind in that I never cop to being anything but a coward. One of my brothers said once that while he would never be a fighter, he certainly could run. That would be me, too, except that I'm really slow, so I don't run, either.

What that means is that sometimes I have to stand up. I learned it from the Constitution our military swears to uphold, and from George Wagner and Joe Wildermuth. Even from the school board that banned a Stephen King book because a parent didn't want her son reading it.

I will not make a habit of writing political columns. Not because I don't feel things strongly, but because I like writing about fun things and because I think people's beliefs should be their own and respected as such. But there are times, as I said, when I have to stand up.

Have a good week. Stay safe. Be nice to somebody. Buy a veteran a cup of coffee.