A year ago today, I posted this blog written by Don Kegarise. He and Kathy attended a presentation my friend Nan Reinhardt and I did Sunday, and I was reminded of it. I'm  so grateful they came, and so grateful he's willing to share his talent. He has a show going on at the Rochester Library right now. If you live nearby, stop in and see it. His work is wonderful. 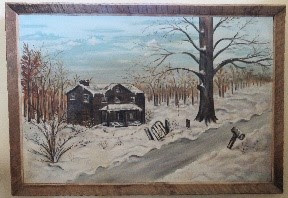 The 24” x 36” picture hangs at the back of the studio out of light and traffic of hundreds of paintings that come and go. Some are admired and sold, others changed around and hung in other rooms. Many of them travel miles to art shows in different cities. While the poorly done sixty-year-old painting collects dust that dulls the warm snow scene featuring an old abandoned house, the story is not about the painting, or the artist, but about The Frame.

The big snow scene was finished. It really fell short of what I had in mind, but it was finished. It was only the third painting since I had started painting again after several years of not painting anything. Unable to find a frame that suited the picture, the only thing left was to make it myself. I sort of knew what I wanted and had found the right piece of wood, but I didn’t have the tools to make it.

My father had been a carpenter and cabinetmaker before he retired, and he still used his shop daily, fixing and repairing things for his kids and grandchildren. I had found a rough-sawn board a full one and a half inches thick that I thought would make a nice frame.

One evening after supper I went down to my parents’ home, visited for a while, then asked Dad if he would help me make a frame. As usual he responded with a “Sure, be glad to.”

Once in the shop I gave him the dimensions and tried to explain what I thought it should look like. We ripped the board down and cut the pieces to length. To cut the miter was going to be tricky because of the angle I wanted for the sides. We had cut extra pieces, so we could practice the miter cuts on the corners. The first two sample cuts did not work, I could see what was wrong, but Dad couldn’t.

After another try I could see he was getting upset. For the first time I noticed his hands shaking and the inability to see in his mind--to visualize--how to cut the miter.

The man who was known for his patience was losing his control. The same man I had watched just a few years before who took a framing square and laid out a 2 x 8 jack rafter, take a hand saw and cut a compound angle on one end and a seat cut on the other end then hand it up to the two men on the roof where it fit without issue. This was the first time I realized he was old and in his eighties. The thousands of hours of work, raising a large family, struggling through the Great Depression and World War II, had taken its toll.

We took a short break and afterwards, managed to complete the frame. Today, sixty-one years later, the painting in The Frame still hangs in my studio. I look at it daily, only now I am the eighty-seven-year-old, with hands that shake a little and must give the simplest task a second thought. I need to be aware of my patience. Sometimes I reach up and rub my hand over the rough wood. The energy is still there and seems to shrink the gap in time. 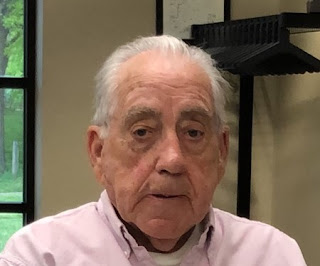 With a background in psychology from Youngstown University, motivational speaker and artist, Kegarise has been proactive in area art leagues and the IAC, promoting art and artists.  He excels in management, sales and creative ideas and has developed numerous organizations with success. Kegarise has lived in the Kewanna area for the past forty years where he co- owned Kegarise Art Studio,   Kegarise enjoys painting landscapes, creating objects from found items , and is the author of several published short stories.